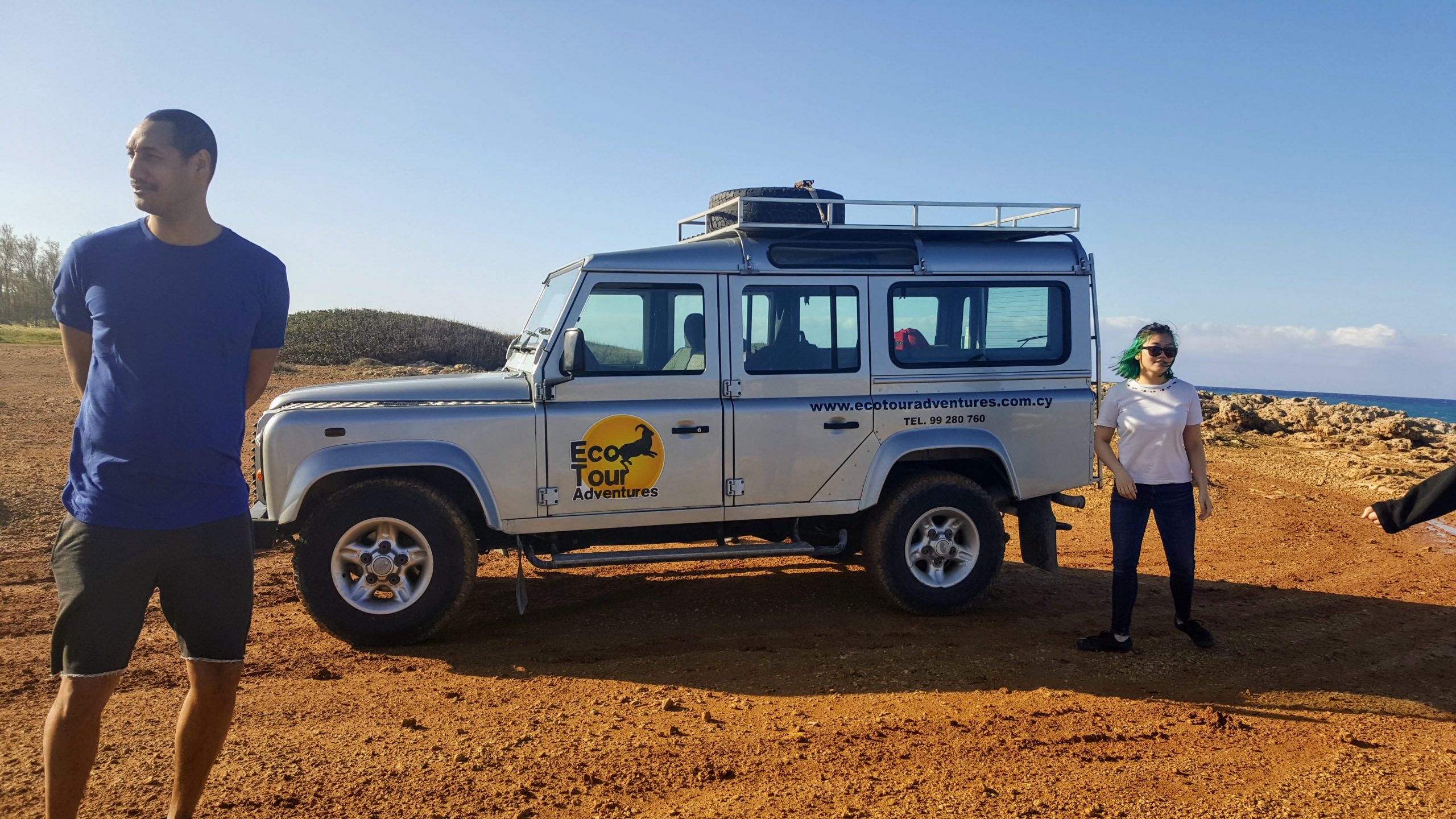 By the Fearless Foreigner

If you ever find yourself in Cyprus without a car you must do the tour I went on today! Even if you rent a car I would still recommend this tour. Over the last few years I have started to get a little less enthusiastic about full day & multi-day tours. I fret over when the next bathroom stop will be and if I have enough time to get food AND see the sights. I feel rushed and feel like I spend more time looking at the time than the sights. The tour I went on today was amazing and not like that at all! Read at the bottom for all the details on the company.

I was picked up at my hotel exactly on time by Andreas, the owner of the company. After picking up four other people we were on our way out of town in his 4 x 4. Before the tour I wasn’t sure how much I would enjoy the bumpy off-road driving. Throughout the day Andreas would be driving along a normal road and then we would quick veer off onto a little dirt road. Rental cars are not allowed on those “roads” so really the only way to go is in a 4×4. It was actually quite thrilling, especially when it felt like we would go careening off the mountain at any moment! Bouncing around the corners with muddy water splashing the windshield, as Andreas would shout to the person in the back to hold on because an extra rough part was coming up.

Our first stop, where I fell in love with the blue seas & skies of Cyprus, was along the coastline to see a shipwreck and to discuss our day’s plan.

We then went on a hike in the Avakas Gorge. Other than the slippery rocks you need to walk across several times, it is a pretty easy walk. Andreas knew when the larger tour groups would arrive so he made sure we started out earlier so we had our own space.

One of the people in our group really loved rocks so we made an additional stop at a rocky part of the coastline. It was some treacherous walking and we needed to be careful where we stepped, but gorgeous sea views of course. Absolutely no buildings or high rises in the area.

Next up was Lara Bay, home to a turtle conservation area. The turtles arrive in the summer so we were only able to walk along the beach and learn about the conservation project.

Before lunch we visited an old Byzantine church.

Then we stopped in the village of Steni to eat at a traditional family owned place called Neromylos “watermill” Café. One of the people on the tour is a professional calligrapher. He got asked to do a sign for the restaurant so we all received free dessert in return! He also wrote my name for me too. Lunch was so interesting, relaxing and authentic that it didn’t feel like I was on a tour at all.

After lunch we drove in Akamas Peninsula National Park. Again Andreas gave us a little detour with a drive along the sea and then a short walk to the Baths of Aphrodite. As our guide predicted, the view along the coast was more impressive than the baths that Aphrodite, goddess of love, used for bathing.

Path to the Baths of Aphrodite

In the afternoon we drove through some more Cypriot villages and stopped in the village of Kathikas for coffee. We were invited into the kitchen to see the unique Cypriot coffee making process.

Throughout the day we drove through the breathtaking scenery of the Akamas peninsula, including the forest area as well as the coastline. We saw and learned about everything from sheep to the growing of orange trees.

What really made this day so fabulous was Andreas, the guide, and the other members of the tour. Andreas was very open to changing plans based on our interests. He is a native Cypriot so he was of course very knowledgeable on many aspects of the country from the plants to locals’ holiday traditions. While I learned a lot on the tour, it didn’t feel like a boring history lesson. The day was full of interesting facts and a lot of humour. He also encouraged everyone on the tour to get to know each other. I really lucked out by having a great group. Andreas even said at the end that the group really made a difference in the day. The tour is supposed to end between 5 – 5:30pm, but he has had groups that finish by 2pm. Our group was parked at my hotel at 5:40pm hanging out and drinking wine and homemade lemonade compliments of Andreas’s mother. I don’t even like lemonade

and it was delicious!

It was one of those days I truly did not want to end!