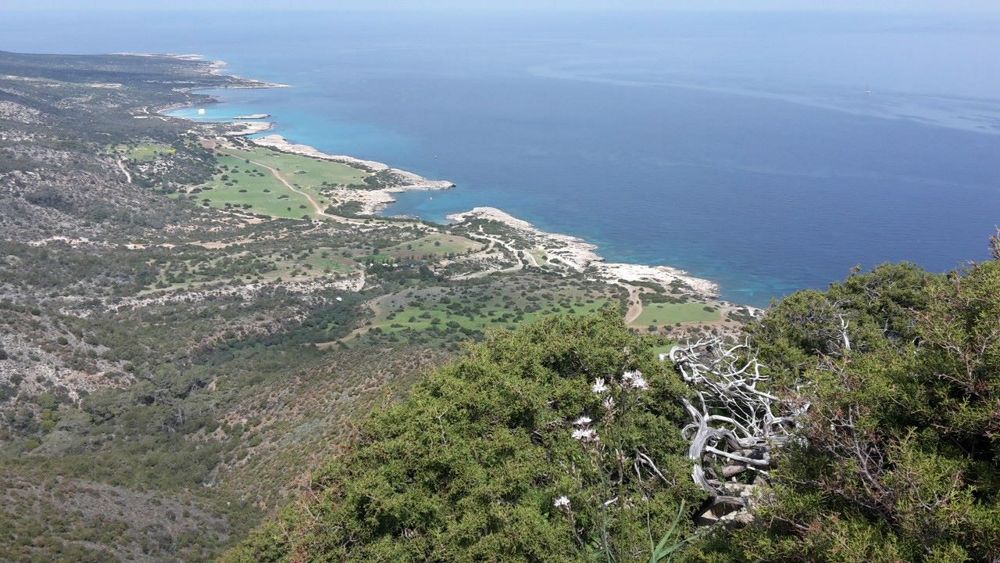 19th June 2015We had a full day trip to the Troodos through Ecotours Adventures Cyprus which took us to some of the less commercial areas and certainly well off the beaten track at times!

Our driver for the day was Chris whom was extremely passionate about the culture and the history of Cyprus and entertained our group throughout the day with his knowledge and wit.
I’m pleased to say he’s also a great driver as we drove on some extremely iffy roads/tracks.

We started our tour by driving south east from Paphos on the Limmasol road and our first stop was to see Aphrodites Rock.

Petra tou Romiou, a rock off the shore along the main road from Paphos to Limassol, has been regarded since ancient times as the birthplace of Aphrodite, goddess of love and fertility.
According to ancient tradition, Aphrodite was born from the waves on the site off the coast of Cyprus. In his Theogony (178-206), Hesiod provides the following dramatic account of the event:
Aphrodite was then escorted ashore on a shell by the soft breezes of the Zephyrs at the rocks known as Petra tou Romiou.

Petra tou Romiou means “the Rock of the Greek” and does not refer to Aphrodite but to another myth, that of the Byzantine hero Dighenis who threw the rocks at pirates to protect his lady.
It is said that in certain weather conditions, the waves rise, break and form a column of water that dissolves into a pillar of foam. With imagination, this looks for just a moment like an ephemeral, evanescent human shape.

There is a long narrow pebbly beach at Petra tou Romiou that extends to either side of the largest rock and its satellites.

Aphrodites rock from the west side

Aphrodites rock from the east side

From here we continued along the Limassol road and our next stop was to see one of the oldest olive trees in Cyprus at Avdimou.

The olive tree at Avdimou with girth 8,70m and estimated age 700 years

The cultivation of the olive tree began during the 2nd millennium BC but the earliest evidence of production of olive oil on the island goes back to the end of the 13th century BC.

The olive plant has had a huge role as a source of tradition, and as a symbol of wealth and abundance, glory and peace, honour and purity. Homer the great Greek poet referred to olive oil as ‘liquid gold’. The Olive has been, and still remains, more than mere food to the people of the Mediterranean – it has been used to crown victors in athletic games, war heroes and also ancient kings.

In many parts of the island there are groups of century old trees, known as “Frankoelies” and following an order of the Minister of Interior, many of these groups and other isolated
olive trees have been declared as protected, and the Department of Forests has the
responsibility of protecting and tending them.

From here we started to make our way to Omodus.

One of the most beautifull villages in Cyprus it nestles in the southern foothills of the Troodos Mountains. At an altitude of 900 meters, Omodos is in the centre of the famous wine making region of the country and is only a 30 minute drive from Limassol town.
The village is built around the Monastery of the Holy Cross which, according to records, dates back to the arrival of Saint Helena in Cyprus (A.D.337). The Monastery is home to a piece of the Holy Rope with which Christ’s hands were tied to the Cross.
In the centre of the Monastery an imposing Church stands having a gilded icon stand inside, dating back to 1817.

Within the Church valuable relics are kept such as fragments of saintly bones and the skull of Saint Philip.

In front of the Monastery there is a colourful, cobblestoned square covering an area of 3000m², surrounded by coffee houses, tavernas and shops. The square is the only one of its kind in Cyprus.

The medieval “Linos” (wine-press) is one of the oldest in Cyprus and a representative example of traditional craftsmanship and wine making techniques.

The stop at Omodus was about 45mins long enough to wander around the church, the village, but a lace table cloth and have a drink at one of the tavernas.

Located near the Foini village, Chantara waterfall is just 1.5 km from Foini and about 3.5 km from the Trooditissa Monastery.

First there is a small wooden bridge that passes over the stream. On the left side you will hear and find the waterfall.

The water stream is split from the rock in the middle and gives the name of the waterfall. Chantara means a Scale or “weighing machine”. The waterfall is not the highest or the biggest in Cyprus but it is said to be the most beautiful.

Compared to waterfalls in England it is a little lacking, Chris our driver recalled one English lady saying that her lavatory had more running water than the waterfall! Mind you with an estimated 320 days of sunshine each year it’s not surprising that there isn’t a massive flow of water.

It was very pleasant around the waterfall with numerous butterflies and lizards to be found.

On leaving the waterfall we went off road en-route to Pedoulas (sounds like it should be Wales) and we had only travelled a short distance when Chris spotted what he believed to be a Bonelli’s Eagle. I did get a look at it before it disappeared and reading up about it we were very lucky as it’s estimated that there are only about 20-40 pairs in Cyprus. Goshawks and Bonelli’s eagle are both possible in this area.

We carried on up the meandering dirt track climbing all the way and eventually we made road again.

The next photo was taken somewhere between Foini and Pedoulas and the view was wonderful and also made special by the singing of Nightingales that could be heard in the wooded valley below, beautiful.

Eventually we reached Pedoulas where we had lunch in a local tavern, the food was very nice and not expensive, unfortunately I don’t know the name of the taverna. I had stuffed vine leaves that were excellent along with a very nice local beer.

Rose at the taverna

This church belongs to the typical single-aisled, timber-roof type of the Troodos region. The narthex, which extends to its south and west side, was used as a loft due to the small size of the church. The loft was used by the women, while only men entered the main church.

The church of Archangelos Michail is one of the few churches in Cyprus which preserves the name of the artist who decorated it. His name was Minas and he was a local painter who came from the area of Marathasa. Minas was a typical “naïve” painter with a conservative style, and followed the Byzantine tradition. However, he was aware of the artistic trends of this time and place which explains the influx of western elements in his work.
During this period many contemporary churches were decorated with wall-paintings of the same style.

On leaving Pedoulas we made our way to the Kykkos Monastery.

The Monastery of Kykkos, the richest and most lavish of the monasteries of Cyprus, is found in the region of Marathasa. It is situated on a mountain peak, at an altitude of 1318 metres northwest of Troodos. Dedicated to Panagia, it possesses one of three icons attributed to Agios Loukas the Evangelist. The icon, covered in silver gilt, is in a shrine made of tortoise shell and mother – of – pearl that stands in front of the iconostasis.

The monastery was founded sometime between the end of the 11th century and the beginning of the12th century, during the reign of Emperor Alexios I Komnenos (1081-1118 AD). Unfortunately the monastery burned down several times and nothing remains of the original structure. Blessed with divine grace, Cypriot hermit Isaiah miraculously cured the emperor’s daughter of an incurable illness. As a reward, he asked for the icon of the Theotokos (Virgin Mary) kept at the imperial palace at Constantinople. Though grieved at the prospect of losing his precious treasure, the emperor sent it to Cyprus with fitting honours together with funds to pay for the construction of a monastery where the sacred relic would be kept. At the hermit’s request, the emperor’s representative in Cyprus Manuel Vutomites also endowed the monastery with three villages. As the gift was later confirmed by imperial charter, the monastery is considered to have been established by imperial decree.

The first President of the Republic of Cyprus, Archbishop Makarios III, served here as a novice. At his own wish he was buried on the summit of Throni, 3 kilometres west of the monastery, and not far from his native village of Panayia.

After Kykkos we made our way to the village of Mylikouri and Chris was telling us about the population and unfortunately I can’t remember exactly what he said. However it was something along the lines of that a once thriving village of about 2000 is now down to a about 20 people, mainly old people in their 70’s.

Most of the village houses are now holiday homes for people looking for rest and relaxation of a weekend and during the summer. This applies to most of the traditional villages in the Triodes. Most of the young people have left to find employment in the cities and coastal regions.

Mylikouri was the start of our descent into the Troodos Forest and our search for the elusive Mouflon.

Looking into the Troodos forest from Mylikouri

The mouflon is a subspecies group of the wild sheep. The mouflon is thought to be one of the two ancestors for all modern domestic sheep breeds.

We had a 30 minute walk through the forest but unfortunately the Mouflon remained elusive, a good excuse for another visit!

After the forest we made our way to one of the Venetian bridges in Cyprus, the Tzielefos bridge, Pera Vasa. Tzielefos bridge is found 5 kilometres from Agios Nikolaos, in the direction of Kaminaria. It is built on the Diarizos river, a river that has been called “barbarian” by the people, because of the great noise its waters make. Unfortunately there wasn’t much water and it was more of a hush than a roar.

A pair of Cyprus tigers as Chris called them

Personally I didn’t find the bridge that inspiring and I didn’t photograph it. It appears however that it is a popular place for wedding photographers and there were three couples there having photos taken that I thought was more interesting.

Brides shoes on the venetian bridge

After the bridge our last stop was to look at the Arminou dam. The dam was built in 1998 on the river Diarizos at an altitude of about 300 meters and has capacity of 4.3 million cubic meters.

After that it was back to Paphos and the hotel.

This was an excellent trip, a great host in Chris and an excellent ambassador for his country. I can recommend the trip and at 40euro per person very reasonably priced.

The 4×4 Jeep used for the tour

What an amazing place! In the village of Panagia h